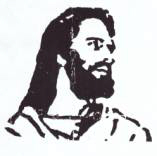 WANTED FOR THE FOLLOWING CHARGES:

practicing medicine without a license, distributing food without permits, winemaking without a license, assault on money chargers, disorderly conduct in the temple, parading a ROUND  without a permit, illegal gathering, healing on the Sabbath, raising the dead, casting out demons, allowing children to sit on his lap, aiding and abetting know prostitutes, sending out radicals into all the world, manufacture and distribution of “living water”, claiming to be the son of God, claiming to be able to forgive sins.

His KNOWN associates are; bikers, radicals, prostitutes, street people, drug addicts, alcoholics, the lost, lonely and hurting from all walks of life.

Beware……is rumored that groups of his followers have been seen nationwide.  These radicals will direct you straight to their leader.  They are known to be armed and dangerous with a powerful weapon called “the word”.

Warning: He is still alive